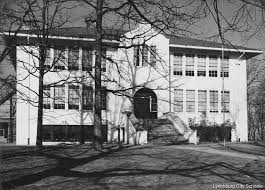 The Fort Hill School was built in 1919 by Campbell County and was annexed by Lynchburg City in 1926. The original building had a capacity of 300 and was built at a cost of $36,643.00. It was designed by Pendleton S. Clark, who also designed E. C. Glass High School. The ceramic wainscoting in the hallways and the windows at both buildings shared a common resemblance. In 1950 a single story addition with a capacity of 120 was completed at a cost of $96,125.00. The school was operated by Lynchburg City Schools until the 1970s. The original building was destroyed in 1975.

After the building was no longer used as a school, it was managed by Lynchburg Department of Public Works. Several private schools and church groups leased the building until 2009, when federal stimulus money (American Reinvestment and Recovery Act) was used to remodel the building.  The Homebound Learning Center and the Middle School Learning Center, which had been located at a Hollins Mill Road location, moved into the building, along with the 8th grade program from the Amelia Pride Center, in January, 2010. Those three programs merged to become the current Fort Hill Community School.